Hey, companion animals! Do you have an embarrassing symptom or a mystery medical problem? Are you having trouble getting your Human to listen to you? Labby is here to help! Her Human is a veterinarian, and if neither of them knows the answer, they’ll look it up for you! Send your questions (250 words or less) to dearlabby@armsofaloha.com.

Lately my Human has been very angry at me. When I go outside I find treats everywhere. The snow has melted and it’s like I won the lotto. She yells at me when I eat them, but they are delicious. I find the ones that still smell of other treats and carrots very pleasing, those are my favorite. Bella’s treats are yummier than mine are, although mine taste pretty great too. I don’t care what they look like or if they are fresh or frozen. I will eat them all. I know I’m a goofball, can you tell her I’m still a good boy? Will you also ask her to fire the person who comes to steal my yard snacks? It’s depressing to go to the big yard and not find any left. Next to having my ears rubbed, it’s the best part of my day!

Your Michigan Friend,
Charlie the Wondermutt

You are not alone, sweetie. A recent survey (people actually study these things! Oh my!) found that 16 percent of dogs eat dog poo. As misunderstood as you feel, Charlie, some misguided Humans actually give away their dogs because they think this perfectly normal behavior is so disgusting! So as grossed out as your Human might be, she really loves you.

Why do some dogs love poo so much? Nobody knows, but I have a theory. My Human tells me that we dogs can smell 10,000 times better than they can, those poor creatures. We have 300 million olfactory (smell) receptors in our noses vs. their puny six million, and the “smell” part of our brain is 40 times as large as theirs. In other words, Humans simply have a pitiful sense of smell, so it goes to show they can be terribly narrow-minded when it comes to our natural doggie instincts and behaviors.

Dogs have been known to eat their own poo, that of other dogs, and that of other species. It even has a doctor-word (coprophagy), and Humans are so obsessed with finding ways to stop us from enjoying the delectable treats that they have even paid researchers to investigate. The researchers found that all kinds of dogs enjoy a little poo snack now and then: old dogs, young dogs, boy dogs, girl dogs, intact dogs, neutered dogs, housebroken dogs, and non-housebroken dogs were all just as likely to eat poo. Poo-eaters aren’t mentally deranged, either: they’re no more likely to have other behavioral problems than non-eaters.

The Humans who answered the survey had tried to stop the poo-eating in a number of ways, including adding pepper to the stools, shoo-ing their poor doggies away from the poo, and adding all manner of things to make it taste bad. As you probably already know, Charlie, none of those strategies worked consistently.

So should your Human be worried? Probably not! Hey Human, we just like it, OK? Charlie is a Good Boy! My Human just told me I have to remind you that there are some risks to poo-eating, such as spreading disease, and that for some dogs, they may be eating poo because of a medical problem. But for most dogs, this is just normal behavior. Humans don’t like this answer, my dear Charlie, so my best advice to you is to not let her catch you in the act. Show her a little compassion and be a sneaky poo-eater! And consider mouthwash after your snack.

With Love and Slobbery Lab-Kisses,

P.S. You are a handsome devil, Charlie! *swoon*

Labby’s Human wants to remind you to consult your veterinarian if you’re not feeling well. There is no substitute for an exam and advice from a doctor who has seen you in the flesh (or fur)! 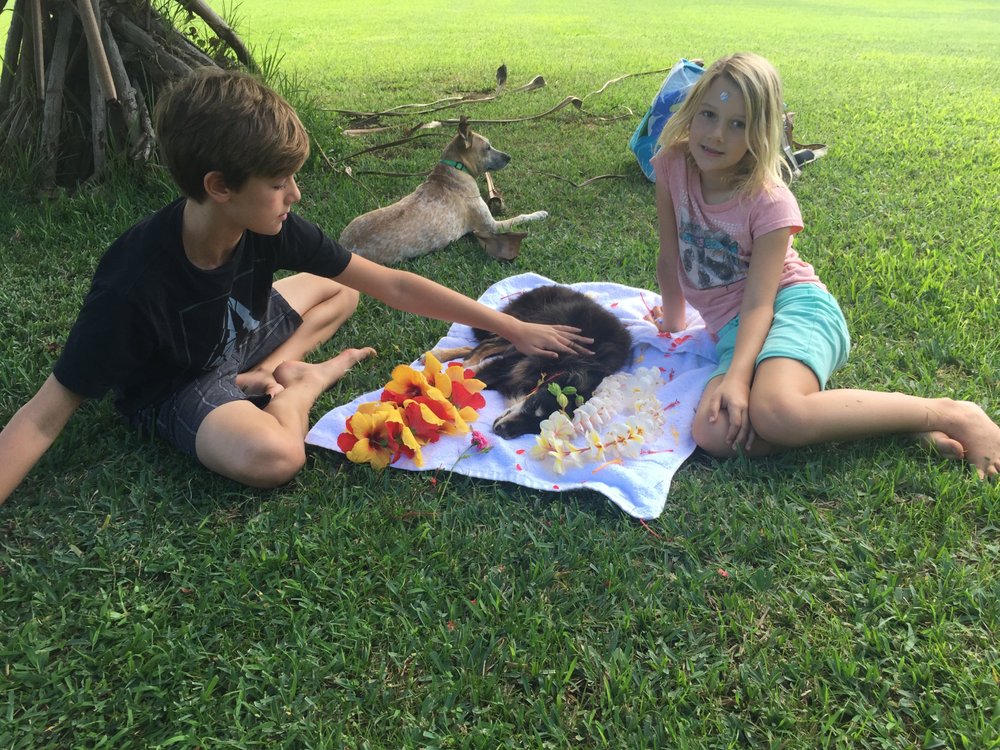 © 2015 by Arms of Aloha LLC. This work may be reproduced and redistributed, in whole or in part, without alteration and without prior written permission, provided all copies contain the following statement: "© 2015 Carolyn Naun DVM, Arms of Aloha LLC” and original title and attribute remain at top of document.